When playing doubles it is important to understand when to hit an angle and when to stay away from angles entirely. Using angles opens up the court, often giving your opponent the choice to hit the ball back at an even wider angle or down the alley. This is not always your best option.

APPROACH SHOTS
Another instance of playing a straight-ahead ball (cross-court but with minimal angle) occurs on an approach shot. When approaching the net, keep the ball in the singles court (not the alley). This makes it more difficult for your opponent at the baseline to find an opening. Approaching without opening the court applies pressure on your opponents, plus your partner at the net will now be able to cover a larger space in looking to cut off the return. Too many possibilities occur when you approach giving a wider angle (using the alley). 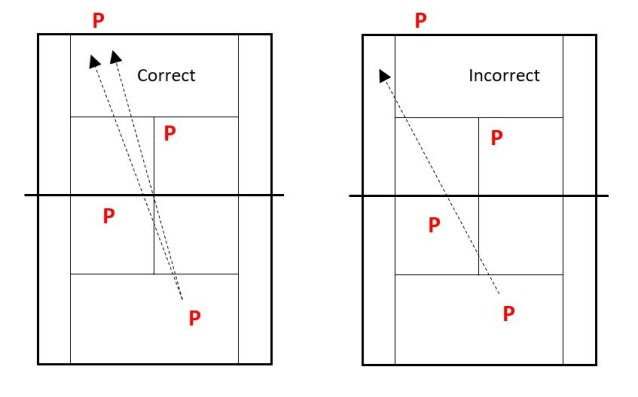 SERVE
Serving to the T or the body and saving the wide serve for a surprise allows for greater movement from the server’s partner and a more predictable return of serve from your opponent.

OVERHEAD
When hitting a difficult overhead it’s critical to go through the middle of the court. This keeps you and your partner in the right place on the court. How often do you hit an overhead out wide and watch as the ball goes sailing past your partner on the outside? Not her fault! Remember: Hit difficult overheads through the middle. Short, easy overheads can be put away with an angled shot.

PLAYERS AT NET
Last, my pet peeve… When all 4 players are at the net, and a volley goes through the middle, both of the opposing players are pulled toward covering the center. If Player A (the “P” on the diagram below where the arrow begins) volleys, but volleys the ball cross-court at an angle, this creates a perfect opening for the opponent to volley straight ahead into the alley vacated by her partner (Player B). Even though it may look as though it was then Player B’s fault for missing the ball coming down the alley, whose fault is it really? If you look at the diagram below, you will also see that the wide angle also gives your opponent the option of sending the volley back at a wide angle. Whether she hits the ball down the alley or at a wide angle cross-court, both you and your partner are now out of position to hit the next ball and win this point.

Positioning in doubles usually is the key to success. Hitting the ball in the direction that allows you and your partner to maintain the best position gives you the best chance of winning each point!

Go Back to Previous Page