I started working as the coach for the men’s and women’s tennis team at the University of Massachusetts in 1992. I coached the men’s team until the program was ended in 2001. And I coached the women’s team for many more years to come. At the beginning of our final season together, I announced that I would be retiring at the end of the year. As hard as the team has worked each year to be successful, 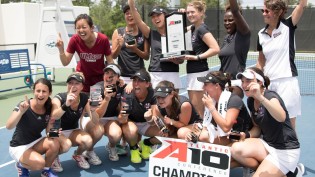 I was touched by the renewed spirit with which they approached our final season together with me at the helm. With tremendous amounts of work and even more heart, the 2017-2018 team accomplished what seemed very unlikely — beating the team that had won the A10 Championships four years in a row! You can’t write a storybook ending better than this one.

Although I am no longer their coach, I will forever be connected to the UMass sports family and the tennis team. I appreciate the support the team receives from the Pioneer Valley community, particularly Friends of UMass Tennis (FUMT), which was started by George Foreman. Please like the UMass Facebook page (linked below) and visit UMass link to follow the team’s progress this year and beyond!